It is generally thought that Offa’s Dyke ran from the Bristol Channel to the Irish Sea following roughly the line of the English Welsh border, a distance of approximately 150 miles. In fact the Dyke was never continuous but consisted of three main sections, one from Chepstow to the Gloucester-Herefordshire border, a middle section from north Herefordshire, through Shropshire into Powys and the final section from north Powys through Flintshire and ending near Prestatyn in Denbighshire. The Dyke actually runs for 81 miles of the 150 miles from sea to sea.

It is generally accepted that the Dyke was built during the reign of King Offa of Mercia who ruled from 757 to 796. It had a ditch on the Welsh side with the displaced soil piled into a bank on the Mercian side. No trees would have been planted on the dyke itself at the time of construction and there are no records of trees actually having been planted at any time. With a few exceptions existing trees are likely to have arisen adventitiously and none is likely to date from near the date of construction, which would make them c. 1200 years old. Only oak and yew trees are known sometimes to reach this age and none of the trees actually on the dyke are that age.

Using the Ancient Tree Inventory website and  1:25,000 Ordnance Survey maps it has been possible to identify the exact course of the dyke and to investigate the trees in the ATI which are located actually on the dyke or up to 5m from it.  These have been found normally to be on the bank rather than in the ditch on the western side which has now largely been filled in.

In total 441 trees have been recorded in the ATI either on the dyke or within 5m of its track.

This figure includes 66 oak trees with a girth between 3m and 3.9m which are not normally regarded as even notable on the ATI. Including these, 135 trees have been named as “oak” with 51 identified as pedunculate and 15 as sessile oak totalling 211 oaks or 48% of the total recorded trees.

Probably the oldest tree on the dyke is Tree number 195 a Pedunculate oak known as the Tree at the Gate of the Dead at the very southern end of the National Trust’s Chirk Castle Estate beside the B4500.  It was recorded on 3rd January 2009 by Robert McBride who over the next 13 years has visited the whole length of Offa’s Dyke and added the majority of the records although Brian Jones added most of the records from Chepstow as far north as Monmouth.  The Chirk oak  before half of it split away and died measured 9.53m indicating an age of approximately 900-1000 years.  Another 35 oaks along the dyke have girths in excess of 5m suggesting ages of over 300 years.

The Oak at the Gate of the Dead

The largest and possibly the oldest yew on the dyke has a girth of 4.32m and is probably about 700 years old.   Although a maiden it has significant fluting which makes ageing it difficult.  It is located in Garnons Wood on Garnons Hill to the west of Hereford and was recorded by David Griffiths, who has recorded many trees for the ATI in this part of the country. 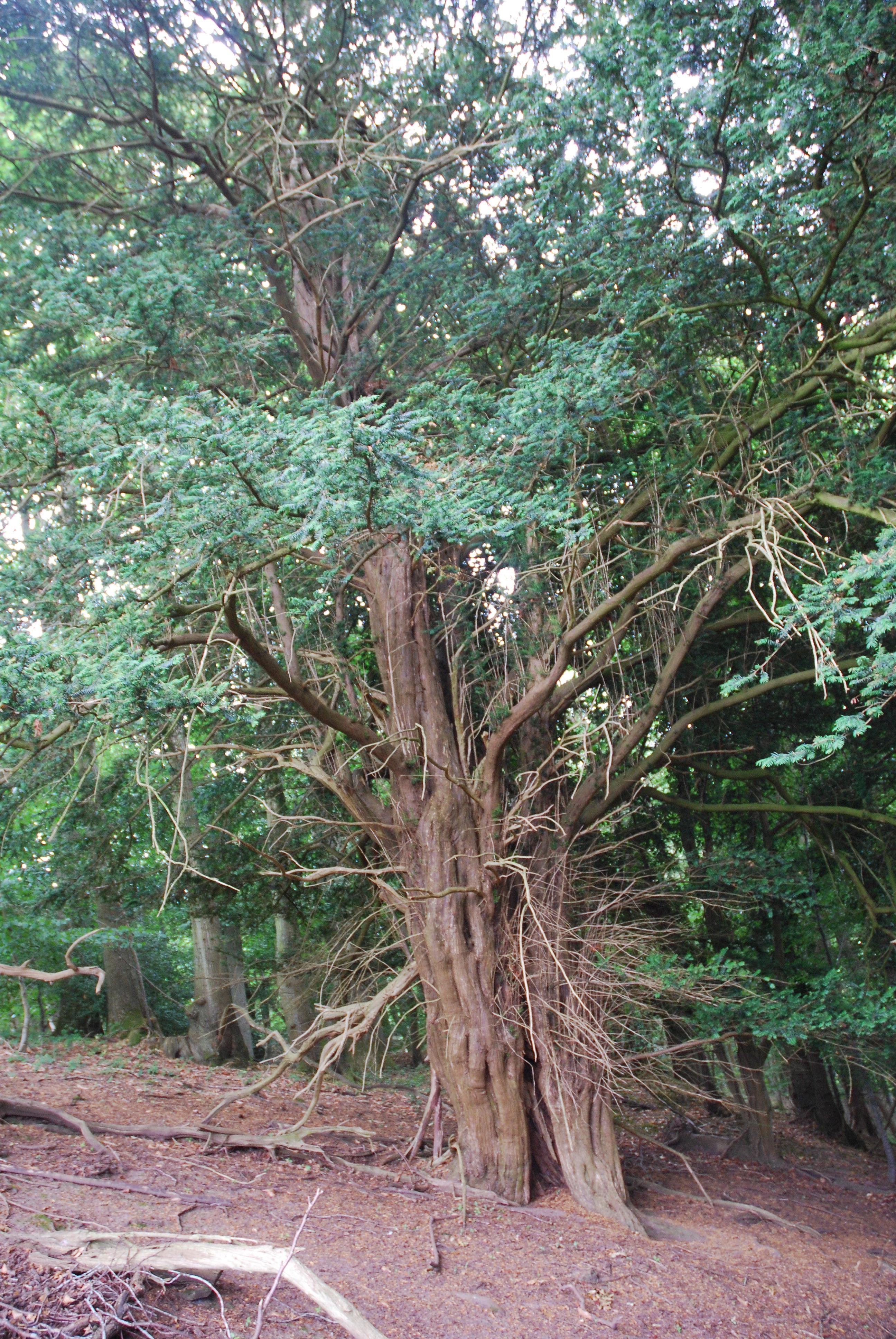 Beech is the next most numerous species with 45 records or 10% of the total. The largest is a multi-stem tree measuring 9.5m girth at 0.5m in the woods on the eastern slope of the Wye River near Whitebrook. Only 2km further north in the same wood on the eastern side of the Wye is a coppice beech measuring 8.5m at 10cm above the ground.

Ash with 36 trees and  8% of the total is the next most abundant species. A massive multi-stem tree with a girth of 8.4m at 50cm on private land to the north east of Chirk Castle is the largest. It also was recorded by Robert McBride.

Limes of all species come next with over 6% of the total but with only one recorder confident enough to specify Common lime as the species.  The presence or absence of fine hairs at the vein junctions of the underside of the leaves is listed in the identification books as the diagnostic feature but even Professor Piggott who authored the definitive work on limes regards the position of the flowers and fruits as the best  feature to separate small leaved lime from large leaved lime.  The former carries its flowers and fruits  erect above the leaves whereas the flowers and fruits of large leaved limes are pendulous and form below the foliage.  The best way to identify common lime which is a natural hybrid between the two species is to look for the mass of epicormic shoots at the base of the trunk rather than trying to interpret the presence or absence and colour of the tuft of hairs on the underside of the leaf.

Strangely the next most common species on the dyke is Scots Pine.  Until a few years ago one would have immediately said that these were planted trees but recent research by Dael Sassoon at Manchester University has demonstrated that Scots Pine is native to this part of Wales and England so the 21 Scots Pine growing on the dyke might just be natural regeneration, although unlikely.  One other pine on the dyke from the photograph looks like Pinus nigra and from its age is likely to be the Austrian Pine variety rather than the Corsican Pine variety which has been widely planted for timber production in the UK until hit quite recently by the Red Band needle blight fungus.

Veteran and even ancient hawthorn with girths up to 3.15m at 0.5m for a multi stem tree feature all along the dyke and these almost certainly will have arrived adventitiously as a result of birds eating the fruits. In contrast the field maple plants which are almost as frequent as the hawthorn will have grown from the winged seed distributed naturally by the wind. The largest is a multi-stem tree with a girth of 3.55m at 0.4m from the ground. It is located very close to the beech at Whitebrook mentioned above.

All along the dyke there are many hazel coppice trees with some having been left uncut for very many years.  The largest with a girth of 4.5m at 1.0m above ground level is near Brompton Hall at Churchstoke and from the picture has some individual coppice shoots well over 50cm in size.

A twin-stem rowan tree just 10m from the dyke near Llanfair Waterdine has a girth of 4.32m and nine other rowans with girths greater than 1.9m have also been recorded.