The importance of ancient trees for wildlife by Aidan Champion

Ancient trees provide a very important and rare habitat that supports many organisms, from underground fungi to majestic owls perching in the branches. Deadwood, ripewood and hollowing cavities, along with other nooks and crannies, are unique to ancient and veteran trees and provide food and shelter for so many specialist species of animal, plant and fungi. It is essential that this intricate and delicate ecosystem is protected and preserved for both future generations to enjoy, and to save many species from extinction. This wildlife guide covers key examples of mammals, birds, epiphytes and fungi that live on ancient and veteran trees.

We usually view fungi and mushrooms as the fruiting bodies which produce the reproductive spores, but underground there is a whole world of the mycelium threads that we are only just beginning to understand.

Beefsteak fungus (Fistulina hepatica): Beefsteak fungus can be identified by the characteristic red surface. It is a large bracket fungus and so grows in the trunk and branches of the trees, mainly oak and other deciduous trees in autumn.

Chicken of the Woods (Laetiporus sulphureus): This fungus mainly grows on Yew, Oak, Sweet chestnut and also Cherry. It is a bracket fungus forming layers and has a yellow colour to it. 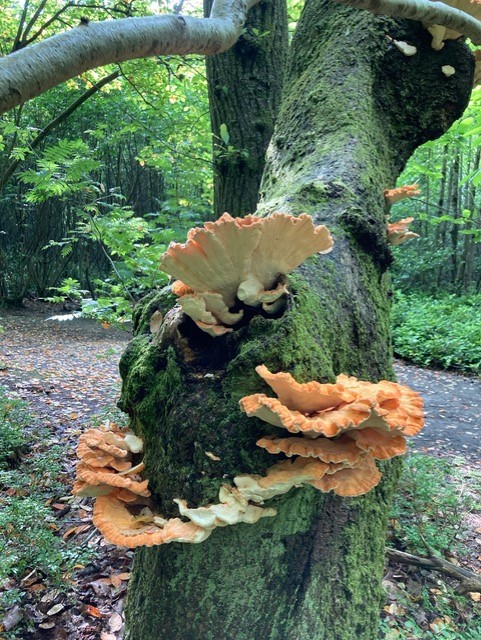 Birch polypore (Piptoporus betulinus): This medium sized species of polypore is usually found on Birches. It is a nice buff colour on top and a creamier white on the bottom. It is a bracket fungus.

Giant polypore (Meripilus giganteus): A fungus found growing on mainly beech, but also oak and pine. It is a brown colour often with stripes of darker tone running around the edge.

Dryad’s saddle (Polyporus squamosus): This fungus is recognised by the dark brown flecks on the upper side of the bracket. It is found growing on Beech, Sycamore and Elms.

Oak bracket (Inonotus dryadeus): A rather curious fungus found on Oaks. It is a bracket fungus and has many smalls holes that ooze an amber, honey-coloured liquid. 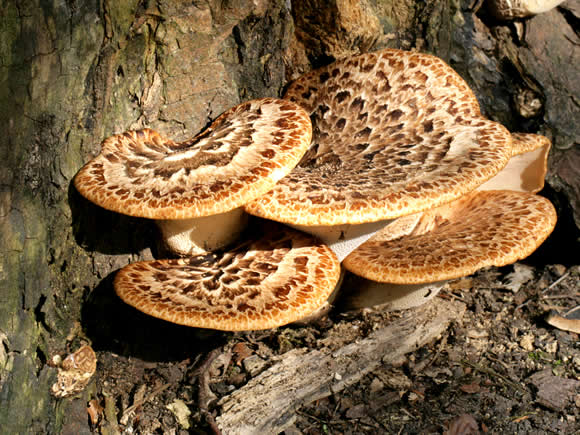 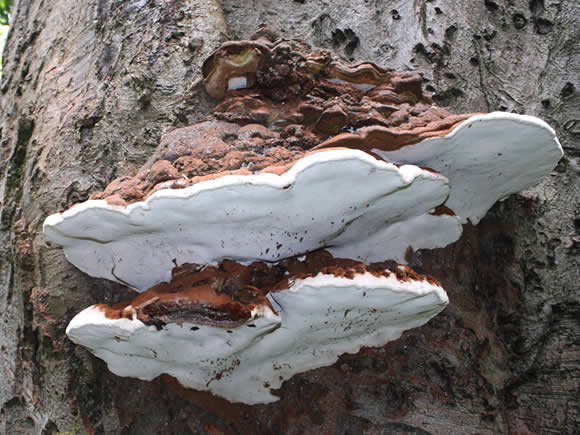 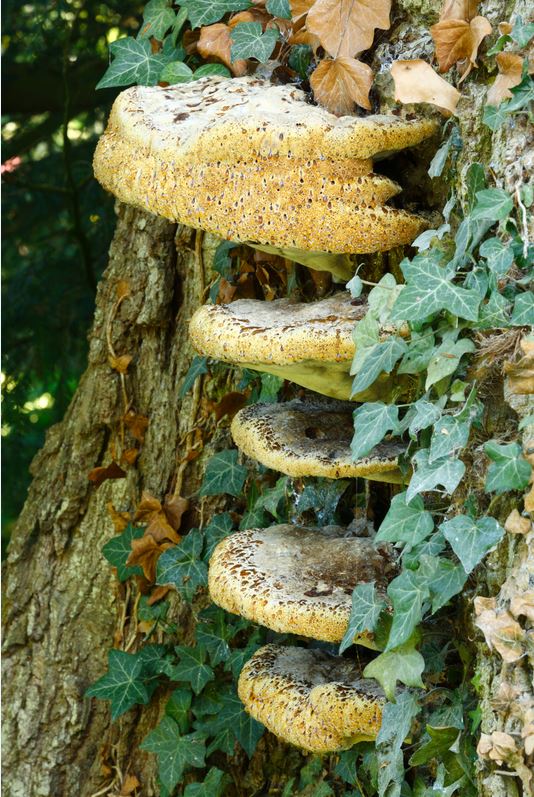 Epiphytes are plants or lichens that use trees and other plants to help them grow. Some, like mistletoe, are parasitic and take nutrients that the tree has produced and use it for itself. Others, like moss, use trees as a structure to grow on, using damp pockets within the cracks of the bark to source nutrients and water.

Common examples of epiphytes include ivy, moss, lichens, ferns and even cuckoo trees – a tree (notably holly or birch) that is growing in a hollow or fork of a bigger tree.

Ancient trees are good habitats for moss, lichens, and ferns as they are large enough to support them. They are also usually rather damp, or at least have damp hollows and crevices, that are good habitats for moss and ferns especially. Ancient trees provide a suitable habitat for lichens as they give the perfect levels of light and moisture that many need to survive.

Ivy (Hedera helix): You will find ivy growing on the trunks of many trees, and sometimes as it gets bigger, the branches and in the crown. Small trees can get completely smothered by ivy if it gets big enough. Ivy provides a good habitat for nesting birds, bats and pollinating insects in the autumn.

Moss (Bryophyta): Moss is mainly found at the base of trees around the roots, but sometimes grows higher up on the branches and trunk as well. It can also be found around many damp holes, forks or hollows. There are many different species of moss, each preferring different light and moisture levels. 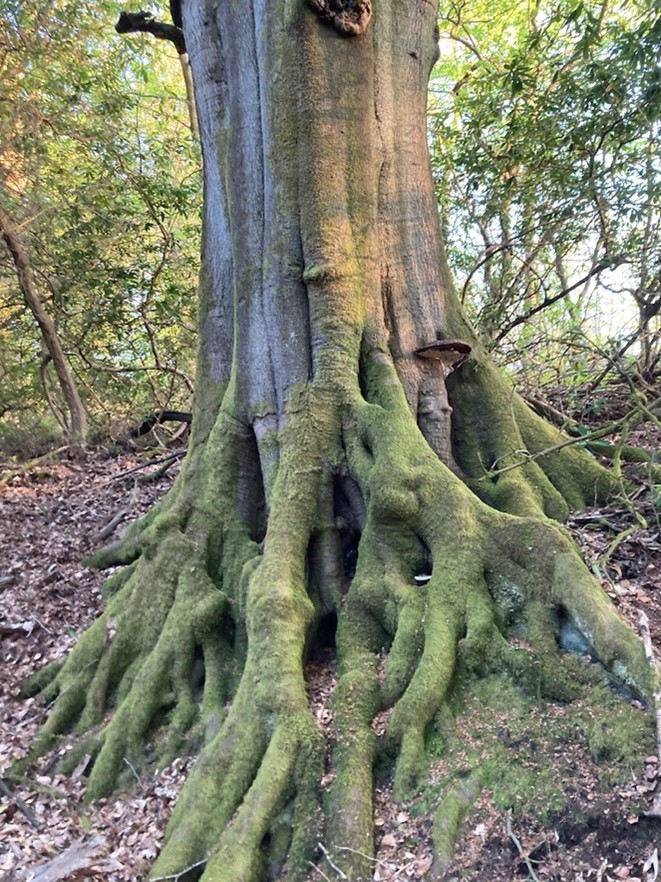 Moss is often seen at the base of old trees. Photo: Aidan Champion

Epiphytic ferns (Tracheophyta): These are mainly found growing on the branches of ancient and veteran trees, but also can grow on the trunks. Like moss they enjoy lots of moisture which ancient trees provide.

Lichens: Lichens can be found all over a tree, from the trunk to the twigs. It consists of both a fungus and an algae, living together in a symbiotic relationship to form a lichen. 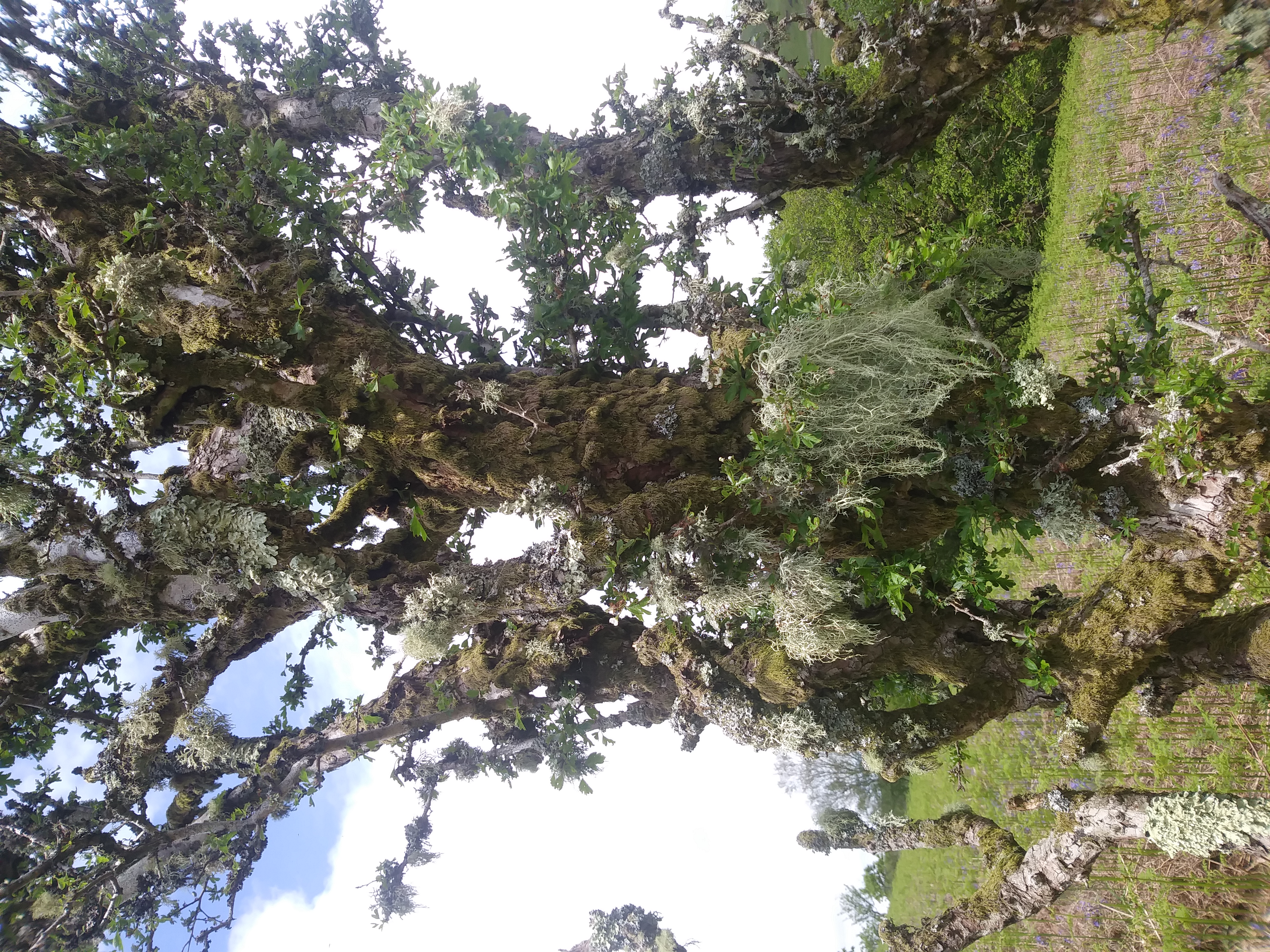 A hawthorn tree with a dense colony of lichens. Photo: Doug Lloyd

Birds use ancient trees as nesting sites and can find food from invertebrates hiding in holes, hollows, and cracks.

Tawny owl (Strix aluco): This bird is recognised by having a brown plumage, flecked with black and white to camouflage it against the trunk of a tree. Tawny owls are nocturnal, so you seldom see the birds themselves during the day, but they do sometimes leave evidence like pellets. They can be found roosting in the hollows of ancient and veteran trees.

An example of an owl pellet. Photo: Aidan Champion

Great spotted woodpecker (Dendrocopos major): This is a very distinctive bird identified by its black and white feathers with a striking red dash on the underside of its tail and on the top of its head. These woodpeckers can be seen - and heard - during the day. You will find woodpeckers in hollows in the upper trunk and branches of a tree, where their nests are out of reach of most predators.

Nuthatch (Sitta europaea): The nuthatch is a small bird with a grey colour to its upper body and a red brown colouration its breast. The head is white with black stripes over the eyes. The nuthatch is diurnal so can be seen during the day. It nests in the hollows of trees.

Ancient trees are valuable habitats for invertebrates due to the high amounts of dead wood they possess. They use this dead wood as food, to live in and as protection from predators.

Stag beetle (Lucanus cervus): Stag beetles are very distinctive beetles known for the two horns or antlers they have on their head. The males have much bigger ones than the females that they use in courtship and combat. Females are often mistaken for the lesser stag beetle; however, this species is matt black and a squarer shape. This big beetle has a very shiny black to dark reddish abdomen and antlers with a black thorax and head. The large larvae feed on the rotting wood of ancient and veteran trees. They are the largest beetle found in the UK but are unfortunately nationally scarce.

Hornets (Vespa crabro):  Despite sometimes being unpopular, hornets  provide a vital role in our ecosystems, so we still must protect them. They are rather striking and have yellow and black striped abdomens with a browner thorax and head. They are often found nesting in the hollows of trees.

Wood-boring beetles: As their name suggests, these insects burrow into the dead wood of ancient trees to lay their eggs. There are hundreds of different species of wood-boring beetles, that depend on ancient trees as part of their life cycle; we call these saproxylic invertebrates. They may often be a dull brown colour and can be found within the dead wood on a tree.

Dead wood on ancient and veteran trees is an important habitat for the larvae of stag beetle (Lucanus cervus). (Photo: mzphoto11/iStock) 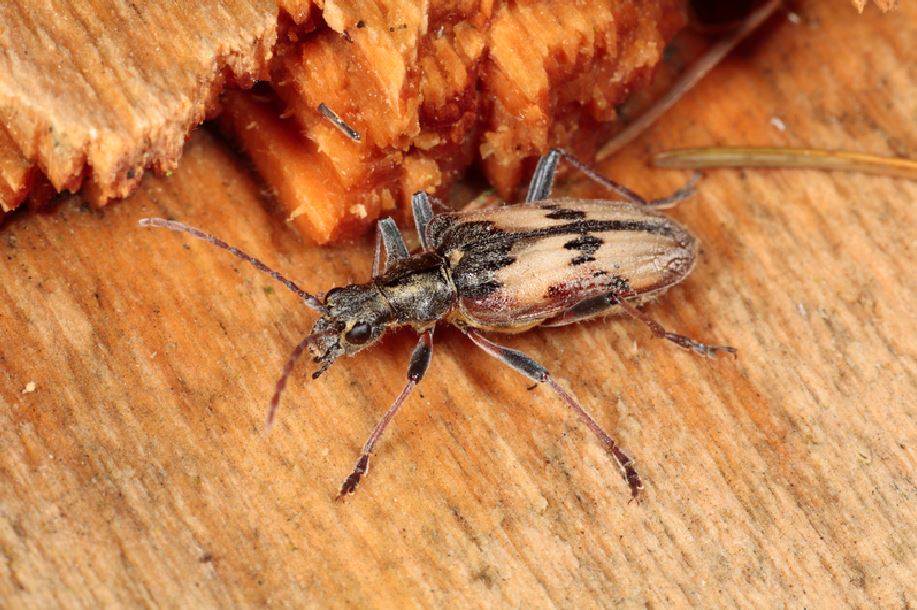 Mammals like bats rely on hollow ancient trees for shelter and food.

Bats (Chiroptera): Bats are usually found roosting in the hollows, smaller crevices, and the patches of loose bark on ancient trees and leave behind evidence such as droppings. There are 18 different species of bat in the UK, and the Barbastelle, one of the rarest and most threatened, favours ancient trees as roosting sites.

Red fox (Vulpes vulpes): The red fox is usually found around biodiverse ancient trees at night and in the evenings. They can leave evidence such as faeces and in areas with softer soil, footprints. In mating season they can often be heard shrieking.

Squirrels (Sciurus): There are two species of squirrel in the UK – the invasive Grey squirrel from North America and the native red squirrel, which is now restircted to areas where the grey squirrel is absent, like Scotland and Brownsea Island in Poole Harbour. Squirrels play a vital role in the life cycle of oak trees as, when they bury their acorns, they often forget where they put them and the acorn germinates next spring. They are often found scrambling around through the branches of many trees.

Overall, ancient and veteran trees form a valuable habitat for a wide range of plants and animals; so we need to do as much as we can to protect them so they can continue to thrive and support essential ecosystems, and provide inspiration for future generations to admire and enjoy.